Paco is a station on the Southrail line of the Philippine National Railways. It serves Paco in Manila, Metro Manila. This is also the last station beside Quirino Avenue before turning left towards Pres. Sergio Osmeña Highway.


It was originally built across Plaza Dilao in 1915, which was during the American colonial period.

the Paco railroad station came into being on March 25, 1908 when the Manila Belt Line from Tutuban to Paco Station and the railroad line from Paco Station to Binakayan, Cavite
was opened.

Furthermore, the Paco Railroad
Station to Muntinlupa line was
inaugurated on June 21, 1908. 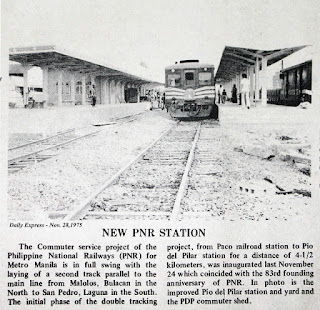 With the closure of the Manila-Dagupan line in the early 1990s, the Tutuban to Muntinlupa line is now the oldest railroad line still in operation here in the Philippines.

The Paco Railroad Station was also the scene of a heroic battle during World War II including the "Battle of Manila". The recapture of the station led to the crucial defeat of the remaining Japanese forces in Manila

The old station, however, was partly demolished in 1996 by a developer that begun
constructing a shopping mall next to it.

The demolition was not completed due to the cancellation of the mall construction, leaving the facade intact and abandoned up until now.

Conclusion:
The best way to make this station be known again is to restore it and start doing it now. We should put importance on this landmark because it’s a part of our history. They say that we Filipinos are sentimental people, this just show that is true for those things personal to us, but for our heritage and history there are less concrete actions made.

Leaving many historical structures all around the country without any action on how to protect the landmarks will be a great loss not just for the country's tourism but also for the next future generation. The government should take immediate actions for this issue.